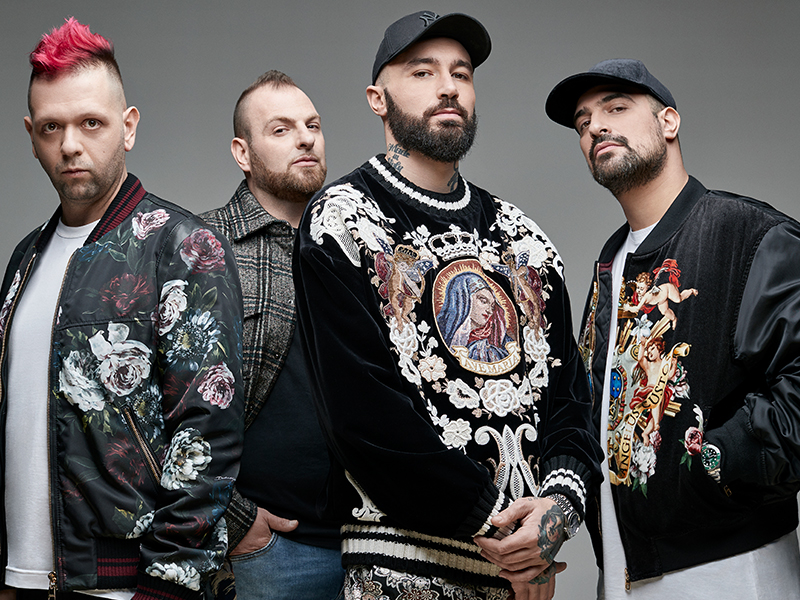 Boomdabash is an Italian group born in 2002 from Blazon, current quartet’s deejay and producer.

In 2008 they released “Uno”, their first official work. In May 2011 they released their second album,  “Made in Italy” and in 2013 “Superheroes”, that immediately reached the top ten of Italy’s Itunes Top Album Chart.

On June 10th, 2015 Boomdabash released their forth work “Radio Revolution”.

In June 2017 they released their new single “In un giorno qualsiasi”, a song with which the band started his collaboration with Universal Music. In the same year the hit “Portami con te” is certified platinum and they take part at Wind Music Award.

The next year they released “Barracuda”, their last album, that reached the top of every chart. The single “Non ti dico di no” featuring Loredana Bertè (certified platinum) reach the top of “Top 100 of the year 2018” chart. With this song the Italian band won the “Rtl 102.5 Power Hits” award and the “Award Earone” at Wind Music Summer Festival.

2018 was a year full of satisfactions for Boomdabash, with a European tour and a countless sold out during the summer tour.

2019 starts with their participation at the 69° edition of Sanremo Music Festival with the song “Per un milone”.